Otology, Neurotology and Skull Base Surgery


The division of Otology, Neurotology, and Skull Base Surgery at Lakeshore Ear Nose and Throat provides comprehensive care of disease processes affecting the ear and temporal bone. These include acute and chronic ear infections, hearing loss, dizziness, and balance disorders. Tumors arising from or invading the ear and surrounding temporal bone are also treated.

We encourage you to read the section Anatomy of the Ear first. Information in the following sections will then be easier to understand. 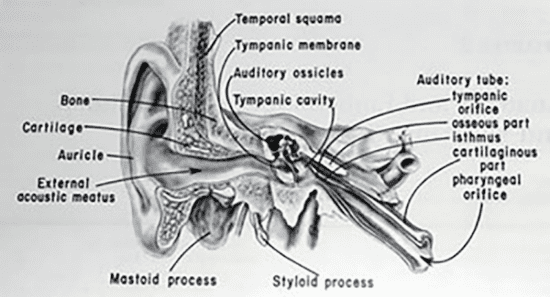 Anatomy of the Ear

In regard to what is commonly felt to be the ear, there is an outer ear, a middle ear, and an inner ear.

Taking the outer ear first, we see the pinna or the ear cosmetically speaking, which resides on the lateral temporal bone. It leads to the external auditory canal which is part of the outer ear structure. That canal is skin lined and ends at the tympanic membrane, or eardrum, the outer surface of which is skin lined. The tympanic membrane has a middle portion, which is fibrous tissue and an inner layer which is the mucous membrane, the same sort of mucous membrane, generally speaking, as occurs in the rest of the airway, including the sinuses and the lungs.

The middle ear consists of the inner surface of the tympanic membrane, the surrounding mucous membrane of the air-containing middle ear in which the ossicles or “little bones” of hearing, the malleus, incus and stapes reside.

One of the most common diseases to affect the ear is known as external otitis, more commonly thought of or discussed as “swimmer’s ear.”

External otitis is an inflammatory process or infection of the superficial layers of the outer ear canal. This process presents with ear pain, significant tenderness to touch, and possible discharge from the ear.

An external otitis which persists or reoccurs is described as chronic external otitis. Chronic external otitis manifests itself with more subtle signs and symptoms. Frank pain is uncharacteristic. Itching, a slight burning feeling, a vague plugging sensation, or pressure are all possible symptoms. Unlike acute otitis externa, the amount of difficulty and the depth of the infection are more deeply seeded.

Acute suppurative otitis media may be viral or bacterial and is accompanied by signs of pain, pressure sensation, diminished hearing and occasional drainage. It is acute both in name and in onset in the patient. This disease is most commonly seen in children, but adults are not immune to this problem. This constitutes one of the most common reasons for a visit to the pediatrician.

Chronic suppurative otitis media manifests in most instances by (1) recurring or persistent drainage from the ear, (2) hearing loss, and (3) infrequent bouts of pain. By definition, there is some form of barrier breakdown between the skin-lined outer ear canal and the mucosa-lined middle ear: This is most often a tympanic membrane perforation. The condition occurs over months to years of time; with varied intervals between episodes of difficulty.

One cause of persistent and recurrent drainage from the ear is in many instances a cholesteatoma; a disease characterized by the presence of skin within the middle ear and or mastoid cavity. This particular process is often combined with an infectious production of mucus, pus, and granulation tissue (which is an inflammatory response to the epithelium.) A combination of skin and granulation tissue has been shown to erode bone, which will progressively result in ever-increased difficulties with the ear structure. It acts as a local tumor which invades and damages neighboring structures.

The disease of otosclerosis is a problem related to the decreased motion of the stapes, one of the small bones, or ossicles, behind the eardrum. An overgrowth of bone around the stapes’ base impairs its normal vibratory capacity. This diminishes sound conduction from the eardrum into the inner ear. This type of block in sound conduction is called a conductive hearing loss, which is the hallmark of otosclerosis.

In our office, we are focused on both physical examination and laboratory evaluation to deal with these various types of disorders. It should be noted that many different underlying causes may manifest similar symptoms in this particular disease process, more so perhaps than in others. Careful historical information, accompanied by physical examination and laboratory evaluation are necessary to fully undertake the care of patients with balance disorders.

This particular disorder is a very interesting one which has evolved in its clinical understanding over the last 25 years from a diagnostic dilemma of sorts, into a disorder which is now quite readily treated in over 95% of people. Benign paroxysmal positional vertigo appears to arise in most persons because of loose particles within the inner ear fluid compartment.

An Acoustic Neuroma is a benign tumor arising from the sheath or insulating cells that surround nerves traveling from the brainstem into the inner ear. The eighth cranial nerve, or acoustic nerve, is most frequently affected. This tumor is quite slow-growing in most instances. Because of its position, it has the potential to cause serious problems including hearing loss, balance difficulties, and facial nerve paralysis. Continued unchecked growth can in rare circumstances lead to stroke or even death.

One of the most disconcerting sudden cosmetic problems experienced by a patient is the onset of facial paralysis. Facial paralysis of unknown etiology is termed “Bell’s palsy” named after Sir Terrence Bell. That term is often used for any facial paralysis, but should in reality only be applied to the group of patients with whom no other cause can be pinpointed.

This paralysis most commonly occurs with rapid onset often accompanied by pain behind the ear.

Manifestations include the inability to close the eye, smile and wrinkle the forehead. This causes a drawing of the face toward the opposite side of the face. Drooling may accompany this as well as excess or alternatively lack of tear production.

The cause of facial paralysis may be varied, and treatment will thus vary.

Meniere’s disease or endolymphatic hydrops was initially described by Prosper Meniere in the mid-1800s and since then literally, thousands of reports and articles have been written about this problem. This is a significant cause of vertigo and imbalance with severe distress as a result in these patients. It is also one of the most commonly over diagnosed disease processes in patients presenting with imbalance disorders. It is felt to be a manifestation of abnormal inner ear physiology with fluid and electrolyte imbalance. This theory forms the basis for much of the treatment of this problem.